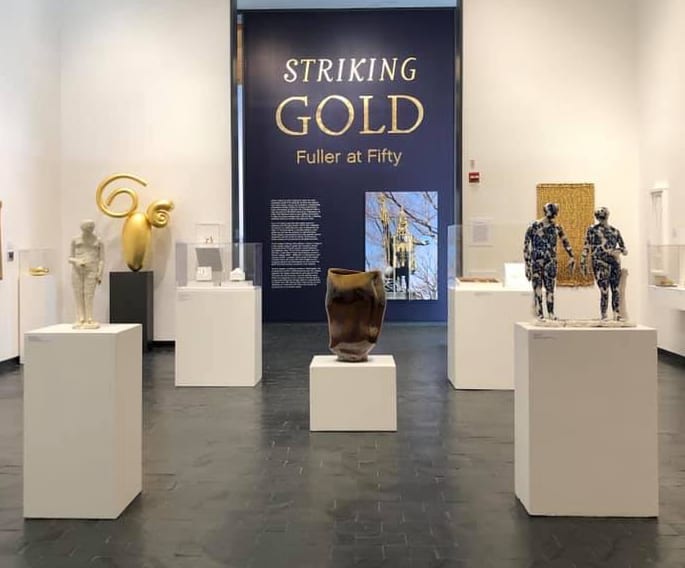 As Fuller marks its fifty-year anniversary in 2019, we turn to gold to commemorate this milestone with Striking Gold: Fuller at Fifty in its Stone and Barstow galleries. This invitational project will explore the storied traditions, contemporary interpretations, skillful applications, and conceptual rigor of gold as an artistic material, while investigating the multitude of cultural, material, and sociopolitical associations. For the 57 selected artists, gold remains central to their work as they delve far deeper than embellishment or decorative effect. This landmark exhibition celebrates the museum’s rich past as we plan for our brilliant future—and shines a light on all things golden.

The exhibition is co-curated by Fuller Craft Museum Chief Curator of Exhibitions and Collections Beth McLaughlin and Suzanne Ramljak, an art historian, writer, curator, and former editor of Metalsmith magazine. Among the exhibition themes to be explored are avarice, vanity, consumption, environmental consequences, power, divinity, cultural and social measures, alchemy, repair/kintsugi, artifice, transformation, and the body. Exhibited works will include craft media as well as fine art mediums to fully reflect Fuller Craft’s dual histories as both a fine art institution and a craft museum.

The remarkable artwork from this exhibition will be captured in an exhibition catalogue with essays from the co-curators and Stuart Kestenbaum, Poet Laureate of Maine and Former Director, Haystack Mountain School of Crafts.

Crafting Dissent 2020 is funded in part by the following cultural councils: Abington, Berkley, Braintree, Bridgewater, Brockton, Canton, Mansfield, Middleborough, Norton, Stoughton, and Whitman. We are grateful for their support.