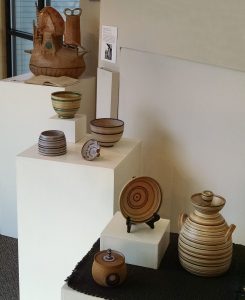 The late Joan Pearson Watkins (1924 – 2013) was dedicated to the preservation and promotion of the arts. This passion was expressed through her extensive collecting, thoughtful tutelage, and hands of her own creative practice at the potter’s wheel and kiln. As a potter, her work led to the first grant in ceramics by the Louis Comfort Tiffany Foundation, as well as a Fulbright Scholarship and grant from the Italian government for further research into the field of majolica wares. Her own prize-winning works were exhibited for approximately a decade in various venues of Western Europe and the United States. As an educator, she was a dynamic demonstrator on television in California, which led to her receiving a Master’s Degree in ceramics from New York’s Alfred University. In the early 1950s, she became Head of the Ceramics Department at the California School of Fine Arts. As a collector, Joan and her second husband, famed historian Malcolm Watkins (a former curator at the Smithsonian and the first curator of Old Sturbridge Village), amassed a collection of the arts of everyday life in the decorative arts of America and Japan. They were passionate advocates of craft-based materials in unique displays that presented the arts of America at the Museum of History and Technology in Washington D.C. Fuller Craft Museum is proud to present the life, artistry, and influences of Joan Pearson Watkins, as her keen eye for beautiful craftsmanship can be illustrated through the livelihoods of artist, teacher, and collector.