Little Dreams in Glass and Metal: Enameling in America, 1920 to the Present 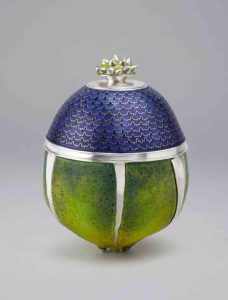 Enameling, the art of fusing glass to metal through a high temperature firing process, gained enormous popularity in the United States in the last half of the twentieth century. In the first decades of the 21st, makers throughout the country continue to explore enamel in a wide variety of formats, finding new meaning and rich expressive potential in the vibrant color and layered depth of this time-honored medium.

Organized by the Los Angeles-based Enamel Arts Foundation, Little Dreams in Glass and Metal: Enameling in America, 1920 to the Present is the first nationally traveling exhibition in more than fifty years to survey this dynamic field. Little Dreams, which includes a wide range of objects from wearable jewelry to large enamel-on-steel wall panels, explores the history of enameling in this country from 1930 to the present through approximately 120 works from the foundation’s collection. Among the 90 artists featured are many of the early leaders in the field including Kenneth Bates, Karl Drerup, Doris Hall, Edward Winter, and Jade Snow Wong; many of its current luminaries including Jamie Bennett, William Harper, John Iversen, and June Schwarcz; as well as artists emerging to leadership roles today including Harlan Butt, Jessica Calderwood, Helen Elliott, David Freda, Gretchen Goss, Sarah Perkins, and others.

The exhibition is scheduled to coincide with the biennial meeting of the Enamelist Society which takes place in Beverly, MA in August 2015.

The national tour for the exhibition Little Dreams in Glass and Metal: Enameling in America, 1920 to the Present was made possible by the Windgate Charitable Foundation, the McLeod Family Foundation, and other generous supporters.

The presentation of this exhibition at Fuller Craft Museum was made possible by the Caroline A. Graboys Fund.