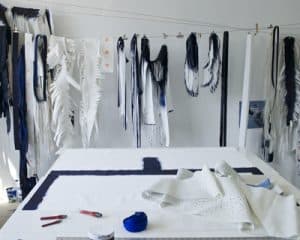 Fuller Craft Museum is organizing the first U.S. solo exhibition of Danish fiber artist, Grethe Wittrock entitled Nordic Currents. The exhibition includes a series of bird-like fiber objects, experimental paper clothing, and wall hangings. There will be about 25 pieces included in the exhibition, many of which will be suspended from the ceiling or mounted on the wall. Grethe Wittrock created the works for Nordic Currents during a residency at The Danish Art Workshops in Copenhagen. She is currently finishing the pieces at her studio in Washington, DC where she has been living since January 2015.

Read the latest article about Wittrock in the November issue of Selvedge Magazine.

Grethe Wittrock is a fiber artist and designer born in 1964 in Kalundborg, Denmark. She resides and works in Copenhagen, Denmark, but recently moved to Washington DC for two years on a grant-funded program. Grethe served as a weaving apprentice for weaver Anette Juel in 1986 – 87 at Copenhagen’s Danish Design School Institute of Industrial Design and in the textile department from 1987- 92. She also completed a one-year textile studies program at Kyoto Seika University, College of Fine Art 1990 – 91 located in Iwakura, Kyoto, Japan. She has shown in over 36 exhibitions both internationally and in the U.S. and is represented in many esteemed public and private collections, including Kunstindustrimuseet, København, The Danish Art Foundation, and The Royal Danish Consulate in New York.

Her design and weaving background is evident in the way in which she prioritizes both material and form. Wittrock draws on a variety of art historical references. She studied traditional textile printmaking techniques at the Seika University in Kyoto and has traveled extensively to Japan where she became inspired by the 17th century painter, Tohaku Hasegawa.

She has historically been known for her works that leave the beholder affected by the tactility and accumulation of yarns. Some of her banners and wall hangings consist of thousands of hand-knitted knots, and their expression is closely embedded in the process of creating the object. Wittrock repeats the knotting or braiding process over and over again with small variations, and both the process and the presence of the repetitions refer to meditative states of mind. Methods and techniques originating in ancient times are being transferred into contemporary expression. Her objects express a powerful stillness and harmony.